This weekend we finally had beautiful weather on a Saturday and Sunday.  Saturday was King of the Track day at Numidia, winners in super pro, pro, street, and motorcycle run off for a Wally, Nhra Jacket, and bragging rights.

We started the day as always with Jr. dragsters.  In the quarter finals, Lorelie Hoover won over Shleby Wruble, Gavin Shoemaker won over Ryan Wruble, Melissa Wilson won over Brai Tate, and Liberti Ferster took the last bye run of the race into the semi finals.  In the Semis, Shoemaker picked up the win over Ferster, as Liberti left -.024 too quick.  Melissa Wilson picked up the win over Lorelie Hoover.  Wilson had the starting line advantage and ran closer to her dial to secure the win.  The final round would pair #1 and #2 in points, with the NHRA D1 Jr. race coming up soon this is the last weekend to decide who would represent Numidia as the race of champions competitor.  Both drivers were on their game for the final, Shoemaker left first on a 9.06 dial to Wilson’s 8.01.  Shoemaker left with the starting line advantage .039 to .043 and was able to hold on a pick up the double breakout win by just .002.  Shoemaker’s win put him with in 2 rounds of 1st place with only Sunday’s race to decide the race of champions representative.

William Danley won the motorcycle class and would hang around to later in the day to run-off for the king of the track wally.

In the street quarters, DJ Clark won over Mark Price Jr, Rick Hafer won over Ashley Held, Mike Mackey won over Rick Morris, and Ron Sternosky took the last bye of the race.  In the semis, Mackey used a big reaction time advanatgae to take out Sternosky.  DJ Clark laid down a .019 package to take out Hafer who had a good run himself with a .025 rt and ran dead on with a .007 for the .032 package.  In the final, Mackey left -.014 too quick giving the win to Clark.

In the pro quarters, Sean Steffey took out John DeBalso, Mark Price won over Soggy Dunn, Dave Harvey took down Terry Neiman and Jeff Krushinskie took the bye run into the semis.  In the Semis, Dave Harvey is making his trip to Numidia from South Jersey pay off as he uses a .017 rt 10.990(10.98) .027 package to take out Mark Price and advances to the final round.  Jeff Krushinskie had the rt advantage over Sean Steffey .019 to .036 and held on for the win as Steffey broke out.  In the final, Krushinskie remained solid on the tree posting a great .009 rt, Harvey was killing the tree all day but missed it a little with a .043.  At the stripe, both drivers were on the brakes, but Krushinskie picked up the win by just .001 in a double breakout.  Krushinskie will try to win his first wally in the king of the track run-off.

In the super pro quarters, CJ Drake picked up a win over Jeff Krushinskie by just .003 in a double breakout, Vinny DiMino got the win over Matt Reklaitis, and Tommy Hoover took the bye run.  In the semis, DiMino picked up the win as Hoover left just -.001 red.  CJ Drake took the bye run to the final.  In the final round, DiMino missed the tree with an .038,  Drake was solid with an .011 and took .005 at the stripe to pick up the win.

DJ Clark in the street class nova would out last the other winners to pick up the King of the Track wally. 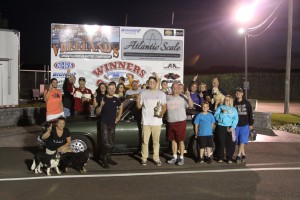 Send A message to Numidia

These Fine Companies Support Your Track. Please Patronoize Them.